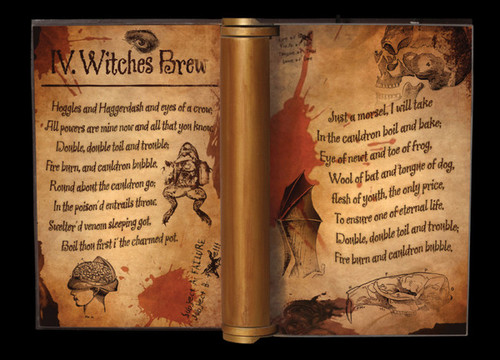 You'll be sure to cast a spell with this Book of Dark Magic on your table! Measuring 11in x 8.75in x 2.5in (closed) and 11in x 16.75in x 2.5in (open), this mystical tome has a motion/sound sensor that when activated will slowly open the book and will illuminate the dark incantations from within as a witchy voice says one of three sayings with each activation of the sensor (Double, double, toil and trouble, fire burn and cauldron bubble!; Round about the cauldron go, in the poisoned entrails throw! Sweltered venom, sleeping got, boil though first in the charmed pot! Ah-ha-ha-ha-ha-ha-ha!; Ah, I see my next ingredient has arrived! With you, my spell no longer deprived! Just a morsel I will take, in the cauldron boil and bake, your youth and flesh, the only price - to ensure me of eternal life! Ah-hah-ha-ha-ha-ha!; Ha-ha-ha-ha-ha-ha-hah! Another foolish child dares to trespass on this wicked place? Here now a spell to remove that smile from your pretty face! Hoggles and haggerdash, and eyes of a crow - all powers are mine now, and all that you know! Ha-ha-ha!), then the book slowly closes and lays silent and still until the next sensor activation. The book can be opened manually without damaging the motor mechanism. Requires 3 AA Batteries.P>